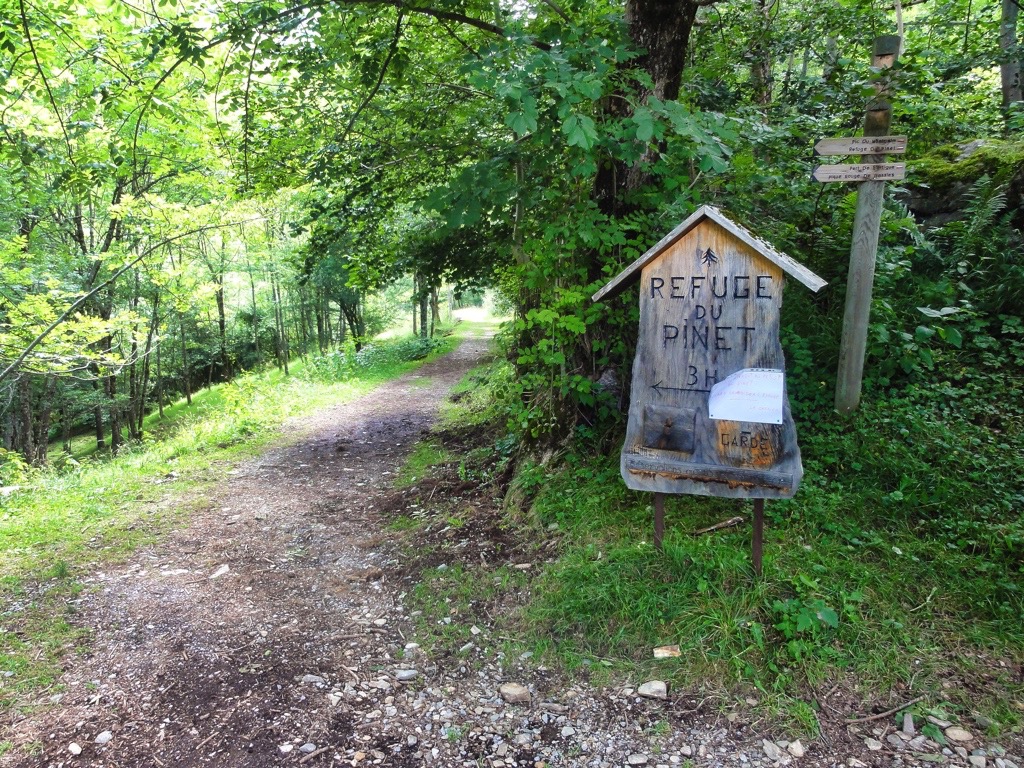 About 2 years ago, I promised Judit that someday we would go hiking with a tent. The initial idea was to cross from la Vall de Núria to Carança through the Nou Creus summit. But realizing that Judit is going to University next year, I thought it was better to do something more exciting and I suggested to hike la Pica d’Estats.

At 3,143 metres altitude, Pica d’Estats is the highest mountain in the Catalan Pyrenees and one of the most iconic climbs for Catalan mountaineers. I had already climbed it several times from the Vall Ferrera, in Catalonia, and I remember a long approximation, the best way I remember to do it was sleeping in the lake “Estany d’Estats”. 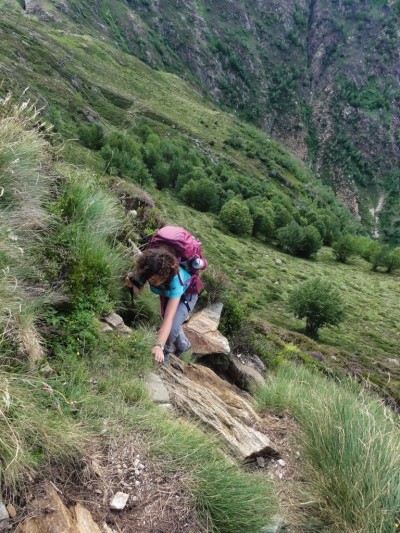 While discussing my plans with Jaume, he suggested to attempt it from France. He told us that it’s a 3h walk from the parking of l’Artigue to the Pinet mountain hut, and then another 3h climb to the summit. So, we could do it in 2 or 3 days.

After checking the weather forecast for several days, we found a window of 3 days without rain and we started our adventure. To go there the road is quite good. I was expecting some high passes and slow roads so we did a big detour via Narbonne, but on our way back, we went through the Porte tunnel and it was really fast.

The adventure starts at the parking of L’Artigue, the closest big village is called Auzat. There is a parking lot close to the start of the trail, and several indications to the Pinet mountain hut. The region is known for Montcalm (3.077m) even though Pica d’Estats is higher and also French. 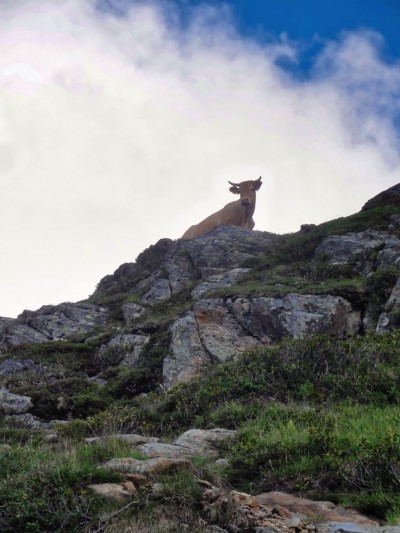 The initial steps are quite easy as the ground is reasonably flat. You walk alongside an old installation to bring water to the valley, with some small dam systems and waterfalls. After the first 1km, things start to get serious. We have to climb 1,000 meters in 3 hours, and the only way to do that is by climbing a pretty vertical slope. The first part is through the forest, which will protect you from the sun, but it will also increase the humidity and you end up sweating like crazy.

You exit the forest at 1,600m. Here you have the feeling that the heavy part is over, there is a meadow with a shepherd hut, but check the altitude. Your destination is at 2,200m, there are still 600 meters to go. This is just the start.

At this hut, there is a path that leads to the Étang Sourt lake. We took this path on our way back, and now that I have done it, I recommend that if you are carrying a big backpack as we did, you take this path. It’s longer, but it does not have the verticality you will encounter if you follow the original path.

The weather was good, but thankfully some clouds protected us from the heavy sun. The trail became more and more vertical with every step. We had to use the help of our hands several times to climb the rocks and follow the path… and for sure the mountain hut was never on sight.

I recall looking at the GPS app every 15 minutes and telling ourselves, we have climbed another 50 meters, but still we could not see the mountain hut, only some cows laughing at our poor skills to climb the mountain with our big backpacks.

We got to the Étang de Pinet by 8:00pm. By that time, the mountain hut had already finished diner service, but they were kind to allow me to eat something, while Judit ate her potatoes with green beans. We had to plant the tent in a rush, and we did it in a cozy place near the hut, without realizing the spot was not perfectly leveled. 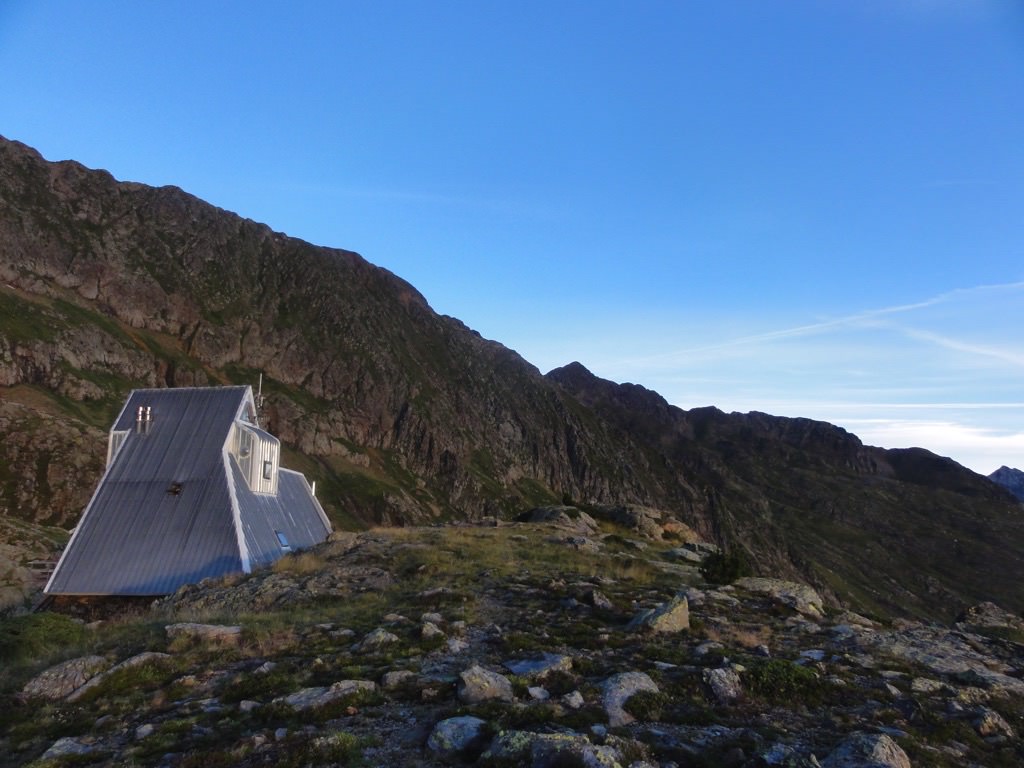 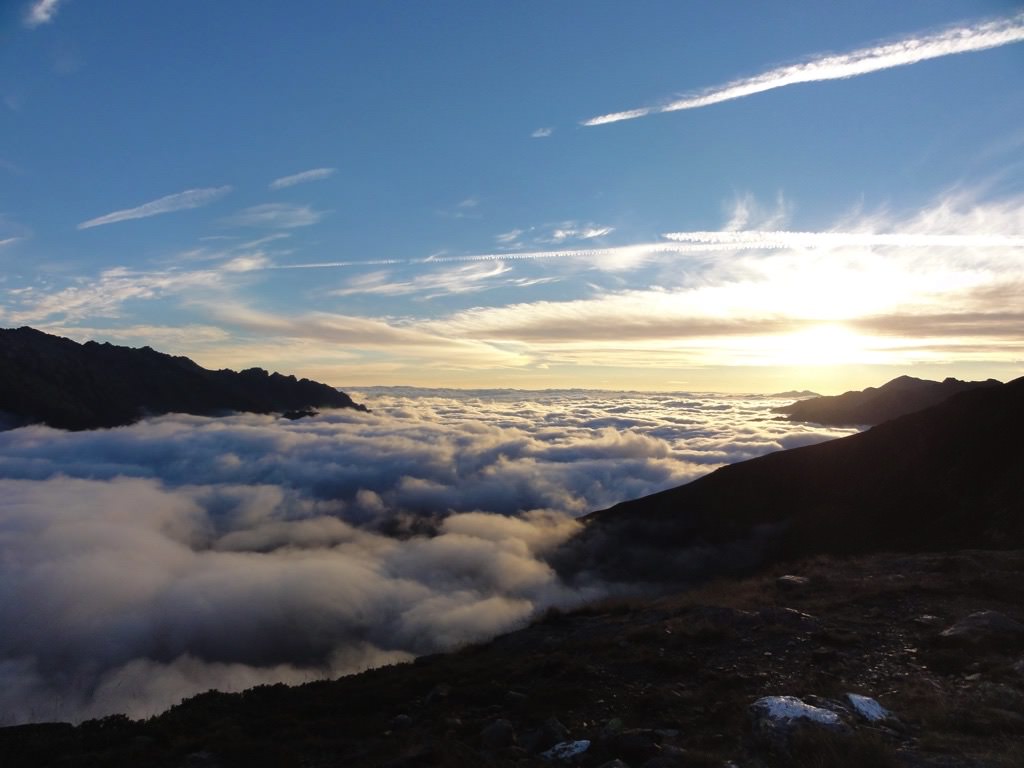 That night we did not sleep very well… When we went to sleep, we realized that our heads were lower than our feet… so we had to sleep the other way around and my head was touching the roof of the tent on a cold and humid night. Judit had heavy cramps on her legs due to the earlier climbing… 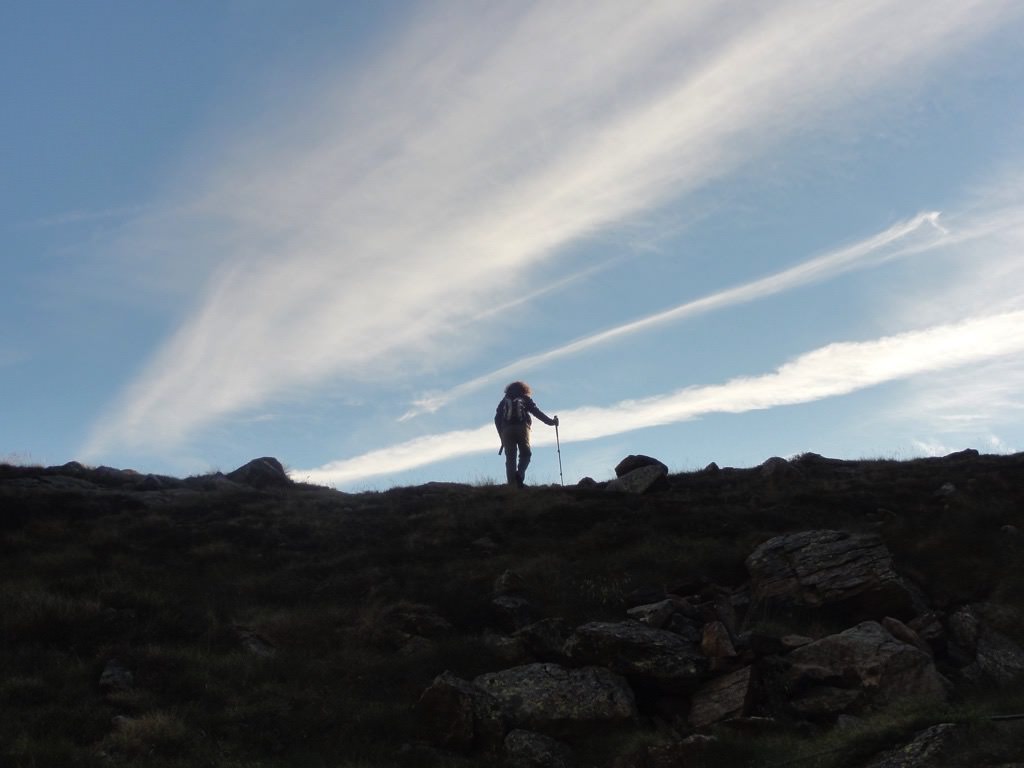 By 6:45 am we were already awake, with a clear sky, the sun still not completely awake, and a nice sea of clouds covering the valley we climbed yesterday. The trail to la Pica d’Estats was visible. We decided to start early to avoid the high sun while climbing up.

We started our way up at 7:30am. Our legs were working, but with some difficulty, we had the cost of the day before and of not sleeping much, but we had the determination to get to the summit.

The first section of the trail is not that hard, you walk around the base of the Montcalm, and the gain in elevation is not that much comparing with the 1.000 meters we needed to climb to get to the summit of la Pica. Once we reached the Étang d’Estats, things started to get serious. We stopped at the bivouacs close to the Étang du Montcalm. It’s incredible how transparent the water of the lakes is in this region. 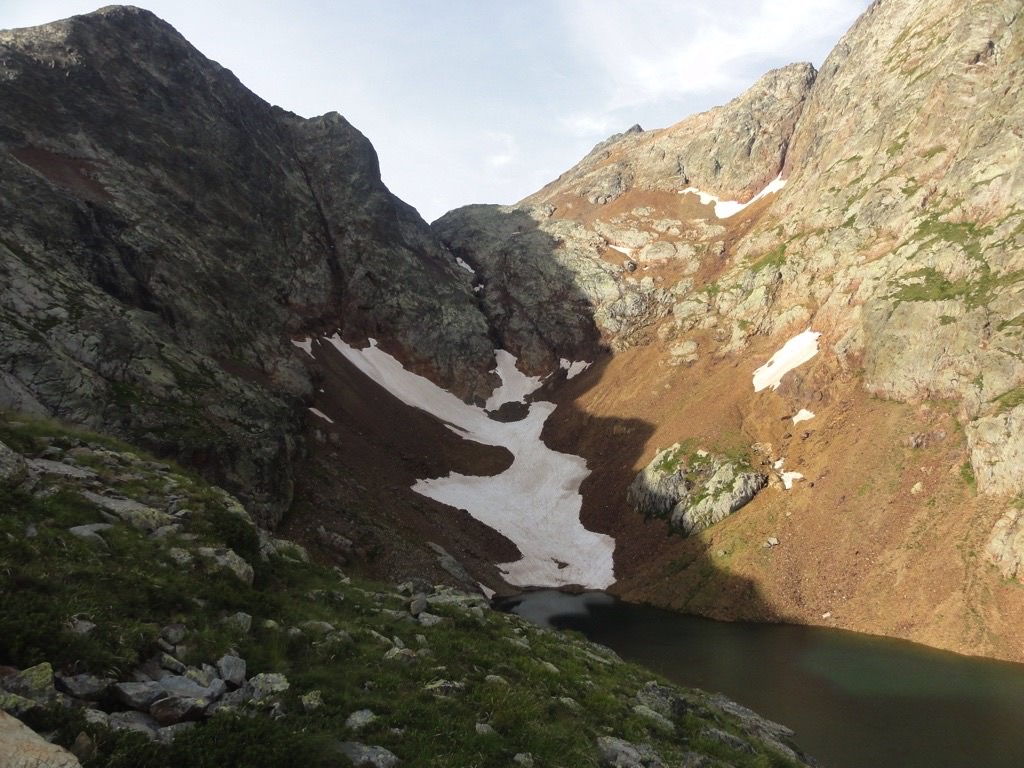 From the Étang du Montcalm the climb becomes more vertical, we need to start using our hands occasionally. Very soon there is no more grass and we are climbing and walking on iron-rich rocks. Some of them look like melted iron. On our way up, we cross some small lakes, some with snow and icy water.

Once we got to the Col du Montcalm, the wind was blowing with intensity and it was quite cold, we put our Gore-Tex and gloves, while some sky-runners overtook us with shorts and sneakers… well, they got there before us, but they regretted not taking any extra layers of clothing.

From the Col du Montclam (2.980m) to the Summit there is still an 163-metre climb. You can see the summit from there, but there is still a long way to go. Seeing the summit helped. We were tired but determined and being able to see the remaining trail helped to give us the extra boost of energy to get there.

A 12:43 we arrived to the highest point of Catalonia, la Pica d’Estats, 3.143m. It took us 5 hours to reach the summit, so probably 1h 30 mins more than what we were told. The day was beautiful, with incredible views of Vall Ferrera, of Catalonia, and of France.
The whole region has no telephone coverage. We asked the guard in the mountain hut, and he told us that at the Pica d’Estats, we would have some signal… but no, the winds were not blowing in the right direction. 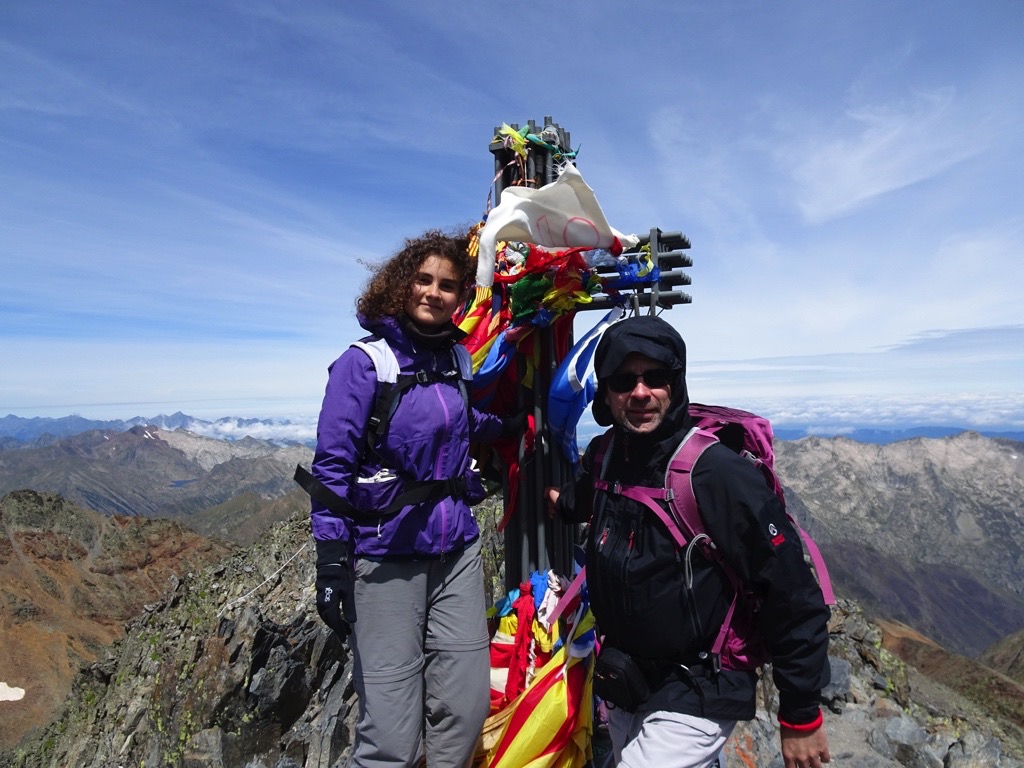 It was cold, so we decided to take some pictures and head down. On our way down, we decided to climb the Pic Verdaguer (3.129m). It’s a quick climb from the Coll de la Pica. It took us less than 15 minutes. Here we did have some signal, so we sent a “we are ok” WhatsApp to the family and posted a selfie on Facebook (shame). 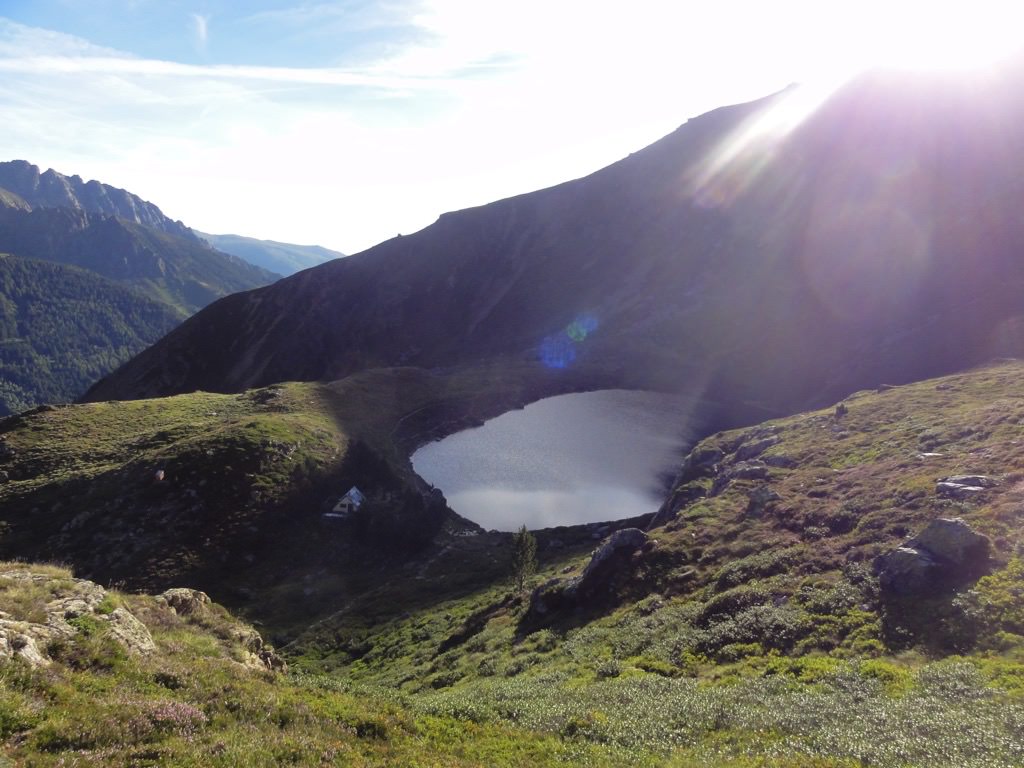 Our way down was very slow, we were exhausted and our legs had already climbed more than 2,000 meters. Once we got to the tent, we had lunch/dinner with some rice noodles and mackerel, and we lied in the sun, relaxed and played cards, until it was time to go to sleep.

The second night you always sleep better. Either you get used to the tent, or simply you are so exhausted that you sleep like a baby. It also helped that the night was less cold.

On our way down, we choose to go via the Étang Sourt, the path is a bit longer, but you avoid the steep, difficult slopes, where you have to climb down with the help of your hands. It was interesting to see that early in morning (8:30 am) there were sky-runners already 200m from the hut, running up to the Pica d’Estats from the parking.

And that was it, once we got to the parking, we took a cat-shower in the river, packed our things and returned to the rest of the family.
More about: europe , catalonia , pirineus , difficult , alpinism
<<Previous
Map View | All sections | Sections | All articles | All languages |